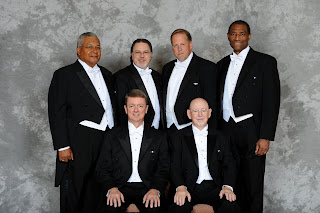 It is with much sadness, that we learn of the passing of Brother Nelson King. Bro. King is probably best known as the editor of the Philalethes magazine from 1994 though 2009. His devotion to Freemasonry had no bounds. He will be very much missed.

My condolences go out to his family.

Bro. Nelson's resume says it all (from his website):

Born June 13, 1945 in Montreal, received his primary education in Perth Ontario, and graduated from Banting Institute, University of Toronto, 1967. Married to Ellen, and has two children, Christopher, and Victoria and two granddaughters. Nelson was appointed Assistant Editor in 1992 and Editor in August 1994] of The Philalethes Society Journal of Masonic Research and Letters, the first non-United States Citizen to hold these positions.

He is also only the second Mason to ever hold the position of President and Editor of The Philalethes at the same time. He retired as Editor in June 2009. Nelson is a well-known Masonic speaker, having spoken in the jurisdictions of Alberta, Arizona, California, Connecticut, Costa Rica, Cuba, The District of Columbia, Georgia, Indiana, Iowa, Jamacia [EC], Kansas, Kentucky, Louisiana, Massachusetts, Maine, Maryland, Minnesota, Missouri, New York, North Carolina, Nova Scotia, Ohio, Oklahoma, Ontario, Pennsylvania, Quebec, Texas, Virginia, and Washington.

Nelson developed the highly successful Internet Masonic Leadership Course. His book "Confessions of a Born Again Fundamentalist Freemason" has become a Masonic Best Seller. VoicePrint®, The National Broadcast Reading Service Inc. an international broadcasting reading service for the visually impaired has recorded some of his historical articles. Nelson was instrumental if the formation of the Masonic Relief for Cuba Committee. And he serves as the Executive Director of that program. He is also one of the few Canadian Freemasons, listed in latest Edition of the "Who is Who of Freemasonry.

Member of the Following Research Lodges or Societies 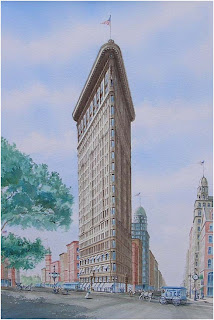 It has been one busy summer...

ssful! We had 138 in attendance, the food & fellowship was great and honoree M.'.W.'. Edward R. Trosin seemed quite pleased with the painting presented to him by the Library Trustees.

I was suffering from the sinus effects of a cold earlier in the week, which left me wondering if I would have a voice to MC the night's events. I survived but my voice was a wreck for the next 2 weeks.

Next up was the New York Scottish Rite's Council of Deliberation. It was held in Liverpool, NY and so driving was short. 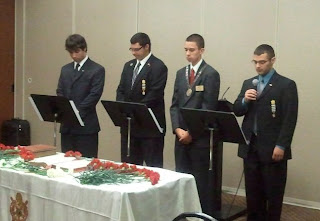 Members of Trinity Chapter, Order of DeMolay presented the Flower Talk to the ladies
attending. There was not a dry eye following an excellent presentation by Brothers Brian Kershaw, Kyle Kennedy, Richard Torrey and
Conor Powell.

The following weekend was just as busy with DeMolay's New York State Convention. Everyone had a great time with dances on both Friday & Saturday evenings, sports and lots of socializing. Trinity Chapter received the "Excellence in Leadership Preparation Award" and Brothers Conor Powell & Thomas Perry received awards recognizing their hard work in organizing the State
Degree Day held in the Spring. Master Councilor Joseph Cruz was awarded "Knight of the Year" from Excelsior Priory, Order of Knighthood. 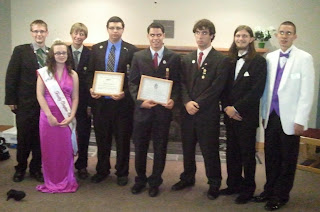 Brother Thomas Perry followed Conor Powell as
the newly elected & installed State Junior Councilor. Conor, in the mean time, after deciding
not to run for higher office, was convinced to accept an appointed position & is now the State Deacon. Trinity Chapter is very proud of both of these young men & wish them much success in the ensuing year.

In addition to all that, I have updated & moved the Valley of Syracuse's website - visit it's new home at www.syr-aasr.org. I am also serving on the planning committee for the Valley's 150th Anniversary which will be held on the weekend of April 27-29, 2012. Watch for more details.
Posted by Br. Richard Powell at 12:12 PM No comments:

For the first time, the Library’s primary fundraiser will be held outside of the Metro-New York area. Please join us in honoring Past Grand Master M.W. Edward R. Trosin, for his years of dedication and leadership to Freemasonry.

Cost for the Dinner will be $40.00. Meal choices include Prime Rib, Poached Salmon, Chicken Francaise or Vegetable Lasagna. Cut-off date for dinner reservations is July 1st.

For those who wish to stay close to the dinner-venue, we have a block of rooms set aside at the Holiday Inn Buffalo-Amherst, 1881 Niagara Falls Blvd., Amherst, NY 14228. We have rooms set aside for Friday, July 8th and Saturday, July 9th. Cost is: $119.00 (plus taxes) per night if staying both Friday & Saturday; $129.00 (plus taxes) if staying only Saturday. Check-in is 2:00 PM or later, and checkout is by Noon. For reservations, please call the Holiday Inn at 716-691-8181. Please note that cut-off date for room reservations is June 24th.

A Dinner Reservation/Journal Ad form can be emailed as a PDF to you upon request. Please send an email to rjpowell@arsmasonica.com

Posted by Br. Richard Powell at 1:38 PM No comments:

Due to unforeseen heart surgery, Brother W. Kirk MacNulty is postponing his lecture scheduled for April 15 at Masonic Hall. The dinner lecture will be re-scheduled for a date to be determined, once Brother MacNulty is fully recuperated. He is doing fine, and in good spirits, but after discussion it is felt that his time is best served resting and regaining full strength.

The Livingston Masonic Library apologizes for any inconvenience. We will announce the new date once it is set.

Posted by Br. Richard Powell at 4:54 PM No comments:

MacNulty’s writing focuses on the impact of Masonic history, philosophy and symbolism on the psychological and spiritual development of the individual. MacNulty’s presentation speaks to Mason and non-Mason alike, bringing personal meaning to the universal principles of Freemasonry, and opening the participant’s vision to a deep and profound interpretation of the centuries-old traditions.
The speaker will have limited copies of his books available for cash purchase.

The lecture: The Secret Identity of Masons

The event is open to the general public
Dinner and Lecture: $60.00

Reservation and prepayment required to:

Email questions to info@nymasoniclibrary.org
Posted by Br. Richard Powell at 4:50 PM No comments:

In April 2008, the Chancellor Robert R Livingston Masonic Library of Grand Lodge announced the acquisition of Processus Contra Templarios, an unprecedented publication containing a collection of facsimile manuscripts relating to the trials of the Knights Templar. Each year since then, the Library has transported the Processus to sites throughout New York State, so that Freemasons and others interested in Masonic history and legend may examine this unique collection. The Library is pleased to bring the Processus to Skaneateles Lodge 522 F&AM, 13 E. Genesee St., Skaneateles on February 3rd 2011.


The event will include a display of the bound volume containing the transcription of the testimony taken from the captive Knights Templar in the year 1308. The display includes facsimile reproductions of the original documents, which reproduce the handwriting of medieval Inquisitors, along with signs of eight hundred years of age, including artificial tears and mold stains. A half-hour presentation from Thomas M. Savini, Director of the Livingston Masonic Library, provides an overview of the Knights Templar, describes their place in history, and discusses their interest to scholars of contemporary Freemasonry. The program includes an opportunity for questions and comments from the audience.

Presented to the world in October 2007, the 700th anniversary of the arrest of the Templars, Processus Contra Templarios is a joint project of the Vatican Secret Archives and Italy’s Scrinium cultural foundation. This unique work includes faithful replicas of the original parchments closely guarded at the Secret Archive, along with exclusive critical commentary on the minutes of the inquiry. The most exciting manuscript in the document collection is the “Chinon Parchment,” which contains Pope Clement V’s absolution of the Templars on charges of heresy, which had been the backbone of King Philip of France’s attempts to eliminate them.

Original documents of the trials of the Templars have never before been offered to scholars. The epic work of Scrinium is presented in a soft leather case that contains a large-format book with scholarly commentary in Italian and English, reproductions of original parchments in Latin, and replicas of the wax seals used by 14th-century inquisitors. One parchment measuring about a foot and a half wide by more than six feet long is so detailed that it includes reproductions of stains and imperfections seen on the originals. The precise reproduction of the parchments will allow scholars to study them, touch them, and admire them as if they were dealing with the real thing.

The Knights Templar have been a subject of both scholarly research and popular fiction for centuries, but never as popular as in recent decades. Legends of their hidden treasures, secret rituals and political power have figured over the years in medieval romances, Victorian novels, modern bestsellers such as The Da Vinci Code, and action films like National Treasure. The Knights have also been portrayed as guardians of the legendary Holy Grail. One theory says that Templars who went underground to escape the persecutions of the inquisitors in the early 14th century evolved as an organization and emerged in Scotland almost two centuries later as early modern Freemasonry. The Livingston Library makes no claim that Freemasonry is descended from the Templars.

The evening will begin at 6:30 PM with a Cocktail Reception followed by the presentation at 7:30 PM. Admission to the event will be $10 per person at the door. All money raised will go the Skaneateles Historical Society.